How REG differs from traditional charity

Raising for Effective Giving seeks to promote a new way of thinking about charity. Our approach is best characterized by two main features:

Neither of the two is in itself new or revolutionary, but combined and applied in the domain of charity, these two principles distinguish REG from more traditional charity projects.

In finance, cost-effectiveness is a no-brainer. Investors consider all the data available to them in order to invest in the option that is best in terms of expected profit. In charity, however, most people put much fewer cognitive resources into the selection of organizations to donate to. People may choose charities

These reasons aren’t necessarily bad. Donors may have different motivations for giving money, and if some of the reasons listed make them happier about their donations and more likely to donate again in the future, this is a great thing! Nevertheless, it is odd that explicit cost-effectiveness is a comparatively rare criterion for people when selecting charities to donate to. Cost-effectiveness in general is the output you get for a given input. In charity, it is the amount of people helped per unit of money donated. If your reason for donating is at least in part that you want to help others for their own sake, and if you prefer to help more people rather than fewer people, then you should have a strong interest in the cost-effectiviness of charities.

Given that cost-effectiveness differences can be enormous between charities, this is especially important. Consider the example of education: 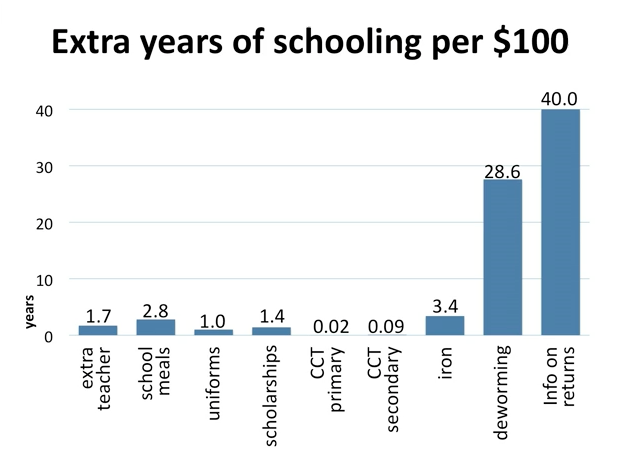 Number of school years you get from donating $100 to various education programs. Source: TED Talk

As displayed in the chart, some programs are up to hundreds of times as effective as others. Deworming, for instance, is more than 280 times as cost-effective as conditional cash transfers for secondary schools – and the above chart only compares educational interventions in developing countries. The cost-effectiveness differences between rich and poor countries can be even more extreme: The chart shows that causing an extra year of schooling in poor countries can be as low as $2.50. In rich countries, it will be hard to cause the same with less than $5,000 (US average: about $8,000).

Some people are from the onset interested in specific causes only, such as e.g. education, micro finance or political activism. In contrast, a strong focus on effectiveness implies a cause neutral approach where interventions of any sort could end up being the best. By dogmatically limiting oneself to only specific causes, one is potentially ignoring interventions that could have a much higher impact.

To some people, the concept of cost-effectiveness may appear to be “cold and calculating”, and they might be uncomfortable with the idea of comparing well-intended projects with each other in order to determine that some projects are “less effective” than others. But it is important to realize that such comparisons are unavoidable: No matter which intervention we pick and why, we will end up not picking lots of other interventions. We are thereby implicitly making the judgment that those other interventions are a lesser fit for the goals we want to achieve with our donations. An approach focused on cost-effectiveness makes these judgments explicit and is thus more honest and more likely to avoid mistakes.

In the light of us having to make a choice anyway, “cold and calculating” is really an inappropriate description. If anything, the approach should be labeled “warm and calculating”, because strong focus on effectiveness follows directly from nothing more than the belief that all lives are the same, and that all suffering (of equal intensity) matters equally. If we give up cost-effectiveness for some other criterion, more people will suffer or die than if we rationally choose the option that is most effective and thus most compassionate.

It is difficult to properly envision that through our donations, we are in a position to save or greatly improve the lives of dozens or even hundreds of people. But this really is the case, even for those of us who aren’t used to cashing in high roller tournaments!

Whether you view it as a “moral obligation” or simply a personal life-goal that is important to you, as a supporter of REG, you want to put an unusually large portion of your resources into effective charities (or their promotion).

What this commitment comes down to varies from person to person. The metric “2% of gross poker cashes” was chosen as a rough guideline — for most winning players this is somewhere between 4-10% of net profit (depending on ROI). The figure obviously varies greatly and it makes sense for players to adjust it to their specific circumstances. Players on a losing streak should of course primarily focus on getting back to a state where they don’t need to worry about the money, whereas players whose fortune is going great are encouraged to donate more.

Taking charity seriously, REG motivates people to donate unusually high amounts in relative (percentage of income) and/or absolute terms. At the same time, it is important not to over-commit in the early phases where enthusiasm is high: Long-term motivation and one’s own personal happiness is of central importance even for people who want to primarily help others, because being happy and motivated ensures that someone will donate effectively for, ideally, the rest of their lives.

Studies show that people donate more when this is common among their colleagues or group of peers. REG thus encourages its supporters, whether they are members or one-time donors, to list their donations publicly to help establish a “culture of giving” in the poker community. Last but not least, REG will continue to do outreach in order to spread awareness about this amazing potential at our disposal — the potential to make a huge positive impact and to collectively change the world for the better.